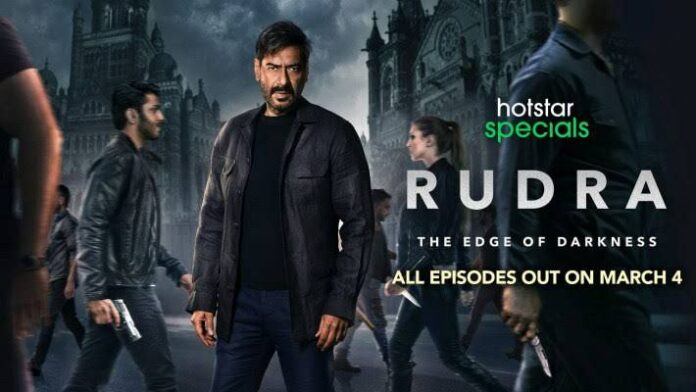 The Bollywood and Indian Fans favourite on-screen supercop, actor Ajay Devgan captivating charisma, for the first time on a digital platform, with Hotstar Specials’ Rudra: The Edge of Darkness has been applauded by fans, critics and the industry.

In a long line of TV shows in India that have been ‘adapted’ from originals in other countries, comes Disney+ Hotstar’s latest crime thriller Rudra: The Edge of Darkness. Starring Raashi Khanna, Esha Deol and Atul Kulkarni, the show revolves around its protagonist DCP Rudraveer Singh, played by Ajay Devgn.

In what’s a close resembling adaptation, where certain frames are an exact replica of the 2010 British drama Luther, the show, told through the point of view of the troubled cop, is able to capture the essence of its source material.

Delves into the psyche of highly intelligent criminals and the detective who hunts them. Each episode in the series features a new threat even as the overarching series arc continues, portraying the grave personal cost at which DCP Rudra Veer Singh (Ajay Devgn) pursues criminals and killers, and the unlikely friendship that he forms with genius sociopath Aliyah (Raashi Khanna).

In the series, the metropolis Mumbai goes beyond being a mere backdrop for our hero’s vigilante actions, and sets the very stage upon which the war between good and evil is waged. Even in this darkness, Rudra believes there is still love in the world. Because in the end, humanity is all we’ve got. And it is for this belief that Rudra sacrifices everything he has.

The story of the series hinges solely on Rudra, a cop who works for the Special Crimes Unit and solves murders while navigating through an estranged marriage. The plot thickens as he runs into Aliyah Choksi, ‘a child prodigy’, as his boss (played by Ashwini Kalsekar) exclaims; and a suspect in the murder of her parents and their dog.

The show recorded the highest viewership received for any drama on the platform and has been trending at the number one spot. This series has been rated by Audience 7.3 out of 10.

Rudra the psychological Crime thriller Entertainment series has been released on 4 March 2022. The crime thriller series which streamed on Hotstar Specials.

Ajay Devgan needs no introduction!! Ajay Devgan one of the most popular and successful actor in bollywood. He has in recent times been part of many projects including SS Rajamouli directed most popular movie ‘ RRR ‘ etc. His few years back release all movie was blockbuster & superhit ex- Golmaal Movie series, Singham Movie series, Shivay, Tanhaji The Unsung warrior etc.

• The best thing about Rudra is Ajay Devgn.

Rudra tells the story DCP (Rudraveer “Rudra” Singh” (played by Ajay Devgn ) whose marriage is in a failing state, as he is facing the challenge of solving murder cases which r complex, bloody and Sick.

Story dsnt Disappoint, as its n adaptation of Luther (is a British psychological crime thriller).

The details in the series is top notch,, One of the most amazing Thrillers Series of recent time.

• The Indian recreation of the hit British detective series “Luther” (2010-19) stays perhaps too true to the source material, offering nothing new or intriguing to fans of the original show. Ajay Devgn is perfectly cast in the role immortalized by Idris Elba, as a mercurial but brutish and fractious detective who doesn’t necessarily go by rulebook when it comes to his investigations.

As an officer of Mumbai’s Special Crimes Unit, the initial episodes feature “Rudra” in a police procedural format, with each episode throwing up a different vicious predator for him to hunt down. The casting deserves praise with Raashi Khanna the standout among a stellar set of antagonists. Director Rajesh Mapuskar has adapted the narrative of “Luther” exceedingly well, with none of the protagonists’ motivations or circumstances feeling forced or contrived and capturing the “greyness” that made the original series such a cult favourite.

Ashwini Kalsekar and the ever-dependable Anil Kulkarni put in marvellous displays as Devgn’s supporting officers and the British capers of the original series are Indianized convincingly and with excellent production quality. Esha Deol who plays Devgn’s estranged wife is perhaps the show’s weakest link. In a role that needed to be impactful despite the short screen time, the actress, unfortunately, remains nondescript and downright cringe-worthy in her sequences, in a performance that reminds you of why she took a break from Bollywood in the first place.

Devgn is clearly at ease in investigative thrillers, with his gritty performance in the iconic “Gangaajal” (2003) being one of my favourite cop dramas ever. Here, he is asked to be almost the polar opposite of what we are used to in his “Singham” franchise of films – surgical, methodical and cerebral with his investigations rather than falling back on brute force. But the seasoned actor switches gears without breaking a sweat, delivering a performance worthy of the iconic original show.

Definitely recommended for people who have not watched “Luther”. For those who have, catch it for ¬a splendid acting performance from Devgn who is finally given a non-superficial cop character to flesh out and show his immense range in.